Carbon Gold works with Nationale Bomenbank, Bartlett Tree Experts and hundreds of individual tree officers around the country, and we’ve long known the positive impact biochar has on tree growth thanks to the many trials we’ve run in partnership with customers and partners.

But there have also been a number of studies into biochar’s impact on tree growth that are completely independent of Carbon Gold.  Below is a summary of six such studies, their methodologies and findings.  We’ve also included some highlights if you want a quick summary to read.

b)     Retain plant nutrients and water in soils

On average there is a 41% increase in biomass from the addition of biochar, tropical forests responded better than temperate forests, deciduous species better than conifers. There were no differences between pot trials and trials grown in soils. However, 75% of results were for tree seedlings (< 6 months old). High responses in tropical trees are likely to be due to P limitation in soils and P found both in biochars and ability of biochars to absorb and retain P. Biochars are inherently low in nitrogen, additional N is likely to be required. The authors suggest biochars should be used in restoration of low C soils and soils which have been contaminated in particular.

Zwart and Kim (2012) grew tree seedlings of red oak (Quercus rubra) in 0.5 litre pots, and Red Maple (Acer rubrum) in 2.5 litre pots of peat/perlite mix with 0,5,10 or 20% added biochar. These trees are important landscape species in Eastern and Central USA.

The biochar used was made from pine wood, with a carbon content of 63%. Plants were inoculated using a stem wound technique with Phytophthora cactorum and Phytophthora cinnamomi pathogens, which cause stem lesions in trees.

Measurements of resistance were made after 65 days for the oak and 108 days for the maple. There was no necrosis in the non-inoculated control tree seedlings. For both oak and maple 5% biochar addition was optimum for reduction of lesions and stem biomass compared to the nil biochar treatment.

Water potential was measured at the end of the experiment in oak, which showed the maximum movement of water came from the 5% biochar treatment (Phytophthora species damage xylem cells, reducing water flow).

Lesions weren’t prevented by the biochar, but the authors concluded from this and other published work that the biochar was conferring some form of resistance to the pathogens.

The authors suggest hormesis i.e. low levels of phytotoxic compounds (from the biochar) were stimulating the growth/defence mechanism in the plants. Beyond 5% incorporation rate there was no further benefit found.

There were several amendments including biochar, biosolids, wood chip, compost and aerated compost tea. Biochar was added at an estimated 25 te/ha each year of the trial (18-month trial), the same rate was used for the woodchip, compost and biosolids. Tree species were Acer saccharum (sugar maple) and Gleditsia triacanthos (Honey locust).

Leaf, root and total biomass was significantly greater for all amendments over nil treatment, with no significant difference between treatments (average 3 soil types and both tree species).

Biochar increased growth by an average of 41% (mean 3 soils and 2 tree species); the biochar source was pine wood, 63% carbon, pH 9.2 (same source of biochar as paper above by Zwart and Kim).

The study found that biochar (and biosolids) were an acceptable soil improvement mulching material.

The trees were grown for 16 months and harvested for root, shoot mass etc.

Generally, the biochar treatment gave similar results to the control peat/bark mix, one of the biochars (same one used in above two papers) held more water compared to the control and several of the other treatments. It should be noted that 50% biochar in a mix is a very high inclusion rate.

Seguin et al. (2018) studied mixes of soil and compost (7.5% in all cases) with increasing levels of biochar up to 7.5% (biochar source was from North American Ash Fraxanus Americana) in Montreal, Canada, where a lot of road de-icing salt is used in winter.

There is concern regarding runoff of de-icing salt and heavy metals into tree pits causing damage to urban trees.

The levels of cadmium, copper, zinc and lead added were the maximum levels found in runoff water from roads with high traffic density, the sodium level was the toxicity threshold for plants.

The authors recommend adding this level of biochar to soil pits when planting urban trees. 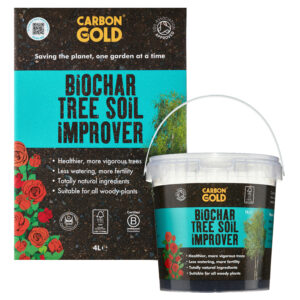