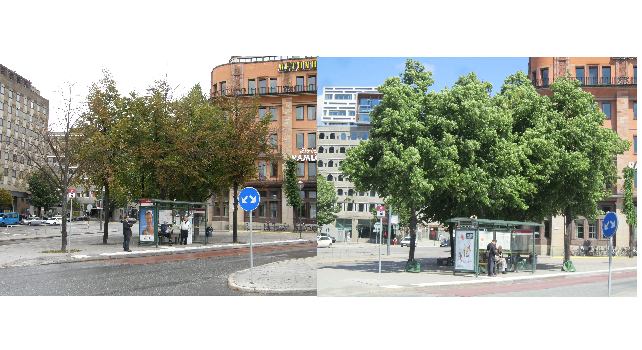 Soil quality and compaction, poor air quality, increasingly wild weather conditions and disease pose an enormous threat to urban trees.  In the UK, nearly one in three new trees planted in urban environments dies within its first year and, because urban tree planting is usually funded by the public sector, that figure translates into a £1.26m waste of taxpayer money over the last five years.  Is there a better way of doing things?

The urban tree care industry is well known for its continuous improvement, progression and innovation.  But still on average 30% of newly planted trees in towns and cities in the UK will not survive more than 12 months after being planted, according to the Forestry Commission, with mortality rates often reaching as high as 50%. This is thought to be due to the harsh conditions urban trees endure and the tightly packed soil that suffocates roots.

With such an alarming rate of urban tree decline, it’s time for the UK to look across the water to positive results achieved elsewhere in Europe.

The Trees in Stockholm

The majority of trees planted in the streets of the inner city of Stockholm had been steadily declining over the last hundred years, and, by the early years of the new millennium, almost all were entering an ‘early autumn’; turning brown and losing leaves as early as July. Most of the trees were planted at the beginning of the 20th Century when conditions were much better, but over the years urban environments have become harsher, and sewer systems, cables and aboveground loads have caused the soil surrounding the trees to become heavily compacted, leaving little room for air and water.

Drawing inspiration from similar Urban Tree projects around Europe, Stockholm’s Road Traffic Administration began an investigation into structural soil to save the much valued street trees from suffocation, with the first new methods being tested at sites constructed in 2004.

Björn Embren, tree specialist at the Road Traffic Administration, managed the various experiments that lead to an unexpected discovery – biochar.

Stumbling upon the solution

Björn had been experimenting with urban trees using lithosol – a thin layer of soil mixed with small rock fragments – and layers of larger stones to ventilate the trees’ roots and allow for water to seep in.  When this experiment had matured by a few years, Björn and his team excavated the trees’ roots to assess their development and found something very strange indeed; the roots of the tree had developed well in the voids between the layers, where there was no soil.

The space allowed the roots to grow unimpeded by the compacted soil that is usually found around urban trees, so Björn and his team decided to experiment with rocky layers without any soil to see if his previous results could be outdone.  He found that he still needed a layer of soil on top to allow for grass to grow, and the team wanted to supplement this layer of soil with something that would allow water to seep through to the tree roots.

While Björn researched soil enhancers to fit his specification, he recalled using the charcoal normally reserved for orchids on some other potted plants at home and how successful it had been in keeping the plants healthy.  That chance epiphany lead him to discover biochar, a high carbon form of charcoal created from waste woody biomass that has been charred at a low temperature with limited oxygen in a process called pyrolysis.

Biochar has a structure like a sponge or a honey comb, this porous structure gives it an enormous surface area that improves soil ventilation, water-holding capacity and provides the perfect environment for valuable microorganisms that improve soil health, meaning greater nourishment for trees and plants.

Since 2009 when Björn discovered the impressive properties of biochar, at least 2,000 trees have been treated in Stockholm with varying amounts of the soil amendment to see what affect it has on the trees themselves.

The team dug holes about one metre deep and two by two metres wide, planted new trees, and then filled up the holes with a mixture of biochar and soil.  But because biochar is inert, and will take some time to build up colonies of nutrients and fungi that would be beneficial to trees, Björn tried adding different ingredients including chicken manure, gravel, nitrogen, phosphorous and potassium, to the soil, biochar and granite mix. The team also installed wells to collect rainwater and filter through to the roots meaning the trees would need little manual watering.

Björn tried to source biochar locally but found it difficult to find a supplier that could produce the quantities needed for the project.  He then discovered Carbon Gold, a UK company that makes and provides biochar readily enriched with worm casts, seaweed and mycorrhizal fungi.  The blend is proven to significantly reduce losses and improve the vitality of newly planted, transplanted and established trees and is endorsed by one of the few companies to hold the UK government endorsed ORETO certification; the leading international scientific researchers and holders of a Royal Warrant, Bartlett Tree Experts.  Björn got in contact with Carbon Gold, and now he has a steady supply of enriched biochar with which to treat Stockholm’s trees.

Although the trees have not yet grown even close to their full size, the result is already impressive in comparison to trees planted without enriched biochar.  By making the trees much healthier, Björn has made them far more likely to survive in the long-term; keeping the city green and saving money.

‘Now that we’ve found biochar has achieved such a great result, we’ve been bulk buying from Carbon Gold.  Its products are perfect for urban trees, and we’ll be using them in the future.

‘We’re very impressed with the way Stockholm’s urban forest is looking now, every tree has a really dense crown all the way outwards from the trunk.  Our plan is to use Carbon Gold’s enriched biochar with local crushed granite on a large scale so that more of our trees survive.

‘There’s no point in spending loads on planting equipment and set-up if you’re ignoring the quality of the soil; spending money now to ensure soil quality saves much more money in the long-term.’ Björn Embren.

Turning over a new leaf

Improving the survival rates of urban trees is not just about value for money; urban trees aren’t just pleasant to look at against a backdrop of concrete and glass; they absorb pollutants, reduce traffic noise, and provide windbreaks, shelter and shade to the people who live within those urban environments.  The UK could benefit financially and environmentally from taking a leaf from Björn’s book and using biochar to save the UK’s urban trees

We’re delighted to announce the appointment of Mike Hartshorn as Carbon Gold’s Managing Director. Mike joins us at a pivotal…