Professional tree care is a serious business, and the world leaders are of course the Dutch. Terra Nostra is the Netherland’s leading tree care specialists, so you might consider them the best of the best.

The results are incredible and clearly show that, if you want a street tree to thrive, you must plant it with Tree Soil Improver. This is a critical finding that could save UK councils millions of pounds when you consider one in three newly planted street trees die in their first year.

The full results are available in the original Dutch here, but we’ve translated the really interesting parts below…

“Enriched Biochar is beneficial for trees in the urban environment”

You may start to feel suspicious when you hear me talk so positively about a product – it reeks of advertising! Time to look at some facts.

Terra Nostra’s scientific research department has been researching the application for biochar for four years. My colleague, scientist Wendy Batenburg, has tested three different batches for a period of two years. These batches were based on ‘Amsterdam’ structural sandy soil, a coarse sand with a uniform grain size of >400 microns. One batch consisted of the regular ‘Amsterdam’ structural soil, which served as reference. In addition, two other mixtures were tested with biochar and Carbon Gold’s enriched biochar with mycorrhiza fungi and various other natural mineral components.

For the test, a sample of 10 x 1 m³ of each batch was placed into a big bag, into which a two-year-old small-leaved lime tree (Tilia cordata) was planted. In total 30 lime trees were tested over two years, of which 10 were reference trees. Above the ground, stress levels and the vitality of the lime trees were measured with a chlorophyll fluorescence meter. The degree of degradation, shoot length and leaf density were also measured. Below the ground the nutritional value (CEC value) of the soil was determined, the size of the roots was measured as well as the growth of mycorrhiza fungi.

The results were highly variable. Compared to the reference trees, the enriched biochar mixture showed by far the best results. More growth and, from the first year, less stress and more leaf vitality. Furthermore, the trees in this mixture turned out to be less sensitive to the larvae of the lime leaf wasp, which were able to develop extremely well on some of the other trees. Below the ground the results were also encouraging. The soil nutrient value of this mixture had decreased 11% after two years, compared with the reference mixture, which showed a decrease of 40%. The strength of the enriched mixture was also preserved, which is an important criterion for planting sand.

At the end of the two year trial the final destructive part of the research project was the measurement of the size of the shoots and roots. When you see these results, you can imagine how happy we are with the help we received from interns and trainee researchers! After two years the 30 lime trees were uprooted, which entailed removing the lime tree from the bulk bags with all roots intact. Then the shoots and roots were sorted into four diameter sizes: smaller than 2 mm, 2-5 mm, 5-10 mm and bigger than 10 mm. The data was totalled for each tree and for each batch.

The enriched mixture yielded more and longer shoots with a lower stress level and a better vitality. The root development in 1 m³ of the mixture was impressive. The ‘bare’ ‘Amsterdam’ structural soil reference mixture contained 706 metres of roots per lime tree. The enriched biochar mixture contained 1,028 metres (!) per lime tree. For the most part (98%), these were very fine roots with a diameter of less than 2 mm. 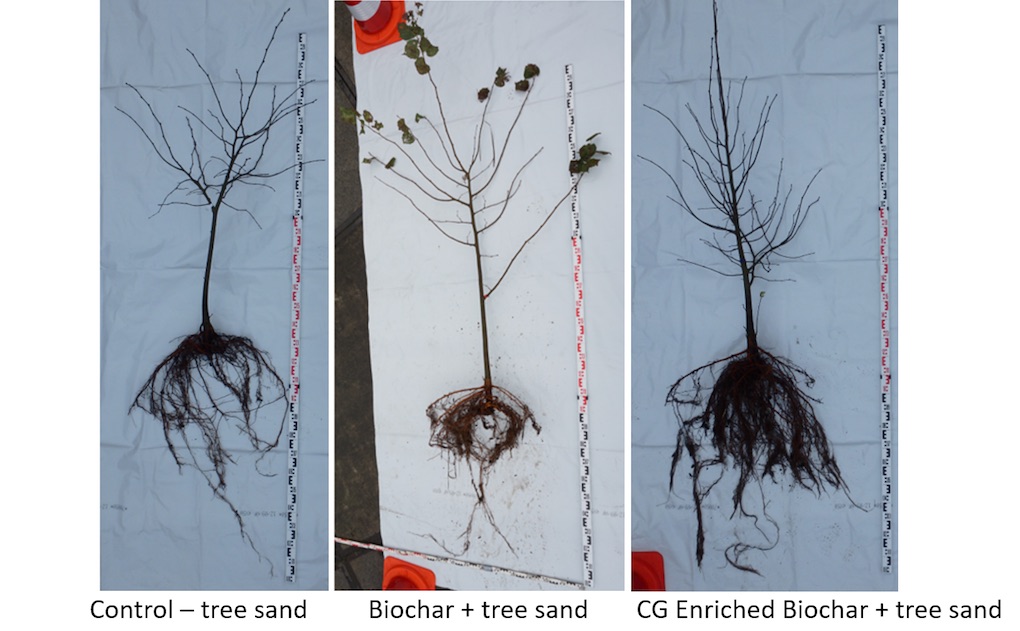 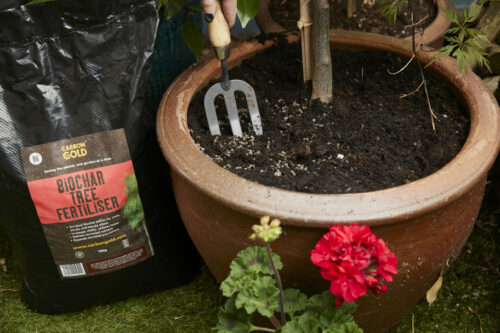 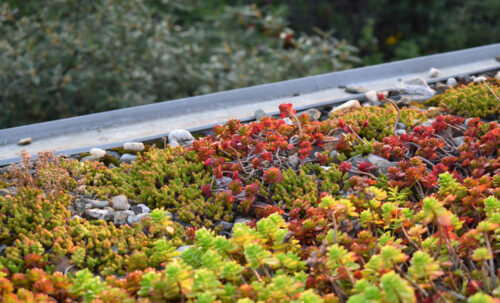 Can you use Biochar in Green Roofs? The loss of green space and shading is a significant factor in increased…