Root Mat - How to Reduce Severity with Biochar 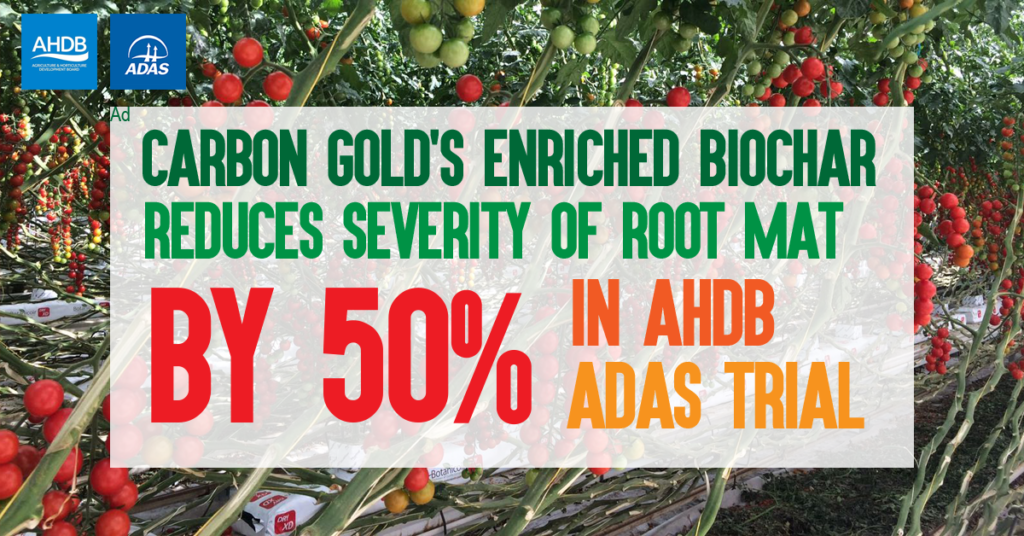 Carbon Gold’s enriched biochar has been confirmed to dramatically reduce the effects of root mat in the commercial stage of an AHDB trial into the effects of biological treatments and biocides on the disease.

Initial findings after the lab stages of the trial, which began in 2016 and were conducted by an independent laboratory, ADAS, indicated that Carbon Gold’s biochar was the best of ten biostimulant products at combating root mat disease in tomato plants grown in rockwool propagation blocks.

The commercial stage of the trial took forward Carbon Gold’s biochar, a single-application product, and Koppert’s Vitix which requires monthly applications. The results, which were published Friday (17 August), showed enriched biochar applied at propagation alone reduced incidence of root mat by half from 34.8% root mat coverage in the untreated plots to 16.8%.

Biochar applied at propagation alone and applied at both propagations and at planting combined also reduced the severity of the disease by significant amounts, 12.8% and 24.1% respectively compared to the untreated at 30.6%.  This is believed to be due to its complex microbial communities which have been shown to play a suppressive role, limiting pathogen populations.

Vitix was shown to have an inconsistent impact on the severity of the root mat and, in one instance, increased incidence of the disease three-fold.

James MacPhail, Commercial Director at Carbon Gold, says; “We’re very pleased to have scientific confirmation that our products can reduce the severity of a disease so prevalent that it seems to impact not just conventional tomato growers but all UK and European growers.  Our enriched biochar products continue to deliver in providing extensive beneficial microbial communities around the roots of young plants. And the fact that our products are organic means both conventional and organic growers can benefit from them. We’re all about increasing productivity across the whole sector, as many growers already know and benefit from.”

Root mat is associated with financial losses due to increased costs of crop management, increased susceptibility to secondary root infections and, ultimately, an increase in unsellable produce. At one UK nursery, these costs were estimated to equate to £29,000 per hectare per year.

Andy Roe, Production Manager at conventional grower Flavourfresh, says; “We’ve long known the benefits of using Carbon Gold’s products at propagation and on the slab. Over the years it’s reduced the impact of root mat disease across my sites and has really made a difference to our bottom line in terms of reducing losses.

The next stage of the trial will be focussing solely on Carbon Gold’s enriched biochar to further assess the single-application treatment. Vitix, which performed poorly, increasing the disease incidence in one trial and only reducing the severity in one instance, will not be carried forward.

To find out more visit www.horticulture.ahdb.org.uk and search “PE 029”.