After the Great Storm of 1987, Londoners were asked to nominate the capital’s leading landmark trees. Over 40 were officially awarded “Great Tree” status in 1988, with a further 20 in 2008. The magnificent Charter Oak of Bexley was elected one of these landmark trees.

Situated in Danson Park, originally part of the Danson House estate, the Bexley Charter Oak is around 200 years old. The oak takes its name from Bexley’s Charter to become a Municipal Borough, which was presented by Lord Cornwallis underneath the Oak in 1937. It is the most iconic tree within the borough, situated within the formal areas in one of its three flagship parks, and features on London Borough of Bexley’s coat of Arms.

The Charter Oak was starting to cause concern, it was showing noticeably diminished vitality and a reduced leaf area index. Its huge canopy clearance was also reduced due to ‘lazy branches’, and the destructive ‘beefsteak fungus’ (Fistulina hepatica) had started to advance.
London Borough of Bexley Tree and Woodland Officer Philip Louis called on Apex Tree Surgeons and Carbon Gold to work with the Council to prolong the life of this historic tree. Apex is the only UK distributor of Vogt GeoTech equipment, which allows them to inject granular material deeper into the ground than other equipment. Carbon Gold is the leading supplier of enriched biochar, a horticultural form of charcoal used to improve soil nutrition and growing conditions.

The oak had been treated with air-spading over ten years ago, however, the soil around the root system was found to be compacted when Apex Tree Surgeons commenced work in autumn 2017. An amenity grade mulch had been applied every year, which was successful in suppressing weeds but had a negligible effect on nitrogen recycling and water retention. Fencing around the root area had been erected approximately fifteen years ago which had been successful in minimising compaction by footfall and preventing climbing and vandalism.

Getting enriched biochar into the root-zone

Biochar Tree Soil Improver is known for its tree revitalising properties and Bexley’s arboriculture department was keen to see if it could reverse the Charter Oak’s worrying symptoms. Apex was commissioned to use the pioneering Vogt GeoTech Injector to apply Carbon Gold’s  Biochar Tree Soil Improver directly around the root system. This unique piece of equipment is designed to inject high pressure compressed air up to a metre into the ground – reducing compaction, improving aeration and drainage, and stimulating root growth. Using the same probe, materials such as biochar can then be injected into the cavities it has created in the soil, ensuring the product is applied deep into the root zone. 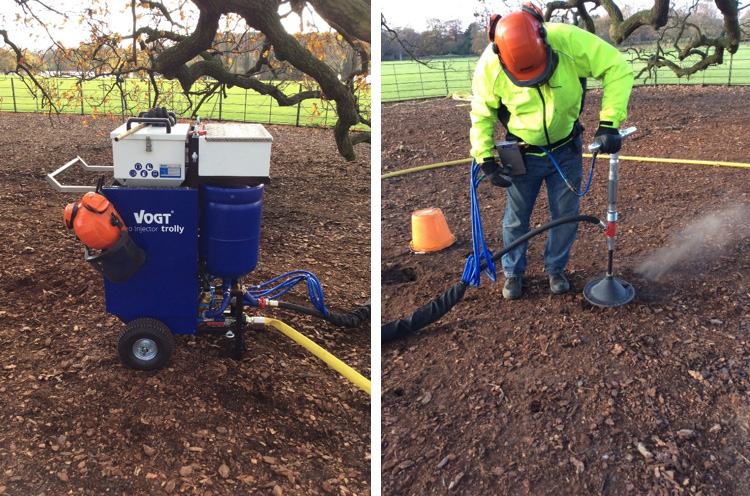 Philip and the team expect to see results within as little as a few months, however, the treatment will continue to develop over the next year or two. Carbon Gold’s enriched biochar is proven to improve the vitality of established trees as it is enriched with Mycorrhizae and Trichoderma fungi which, in combination with wormcasts and seaweed, create a fertile, living soil around the root systems of trees. Biochar has a microscopic honeycomb-like structure which provides the perfect habitat for beneficial soil microorganisms, such as mycorrhizal fungi and actinomycetes bacteria which make nutrients more available to plants. Biochar also decompacts and aerates soils, and stabilises soil moisture, allowing veteran trees such as the iconic Charter Oak to grow strong, healthy root systems so that it can stand tall for many more generations of Londoners.